It’s time for a Boca-bash at the Boca Raton Championship Wrestling Summer Smash.

On Sunday September 4th with the first bell ringing at 5:00pm

Florida’s finest fighters will get in the ring and bring an evening of family-friendly, fun-filled excitement and pro wrestling matches to the Peter Blum Family YMCA of Boca Raton. 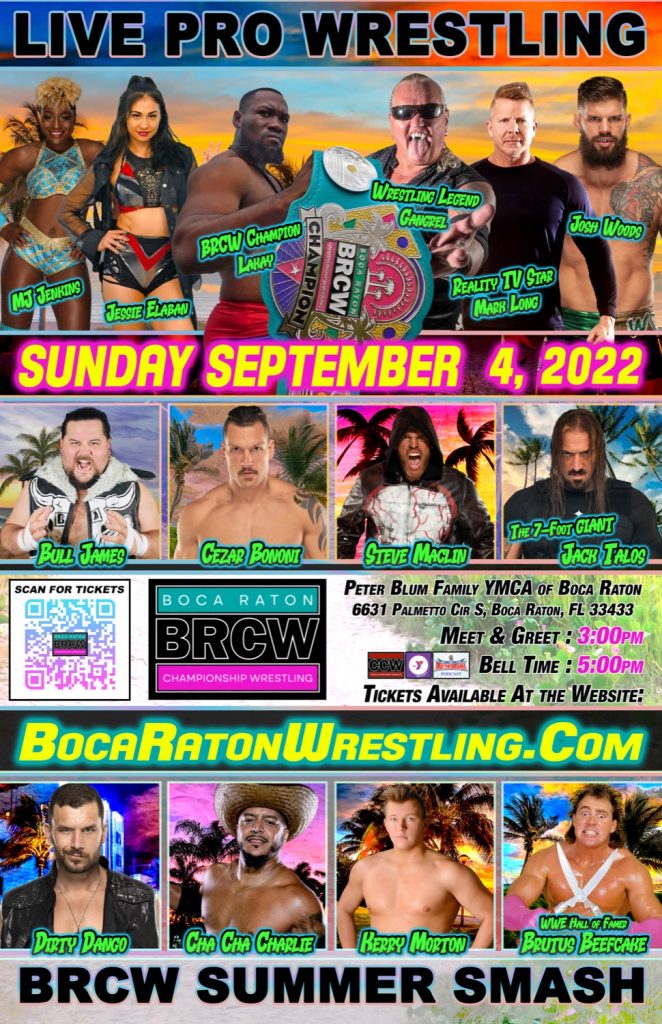 HAVE YOU ALWAYS WANTED TO BE A PART OF THE SHOW?

Well, this is your chance!

On Sunday September 4th with the first bell ringing at 5:00pm

Limited spots available for you to be a special guest referee or timekeeper, and if you want to live out your ultimate wrestling dream you could accompany a wrestler to the ring as a VIP.

It’s Boca Raton Championship Wrestling and it’s bringing a bizarre brand of brawls to Boca, Sunday, September 4th at 5:00pm. Brought to you by Matthewmania and CCW, the Last Territory in wrestling, this show promises to bring action, excitement, drama, and entertainment, in an all-ages, all-welcome, all-inclusive environment.

Come witness the latest, greatest wrestling promotion that’s creating buzz and excitement, with larger-than-life wrestlers, hard hitting and fast paced matches, and a feel that could only be described as Boca Baby!!! It’s Boca Raton Championship Wrestling’s Summer Smash on September 4th, and you don’t want to miss it!